Wild Bee Honey Farm is a second generation company founded in 1966. We maintain 500-600 colonies of bees, although the number of hives varies seasonally.  The Oregon Bee Store is an offshoot and extension of the original Wild Bee Honey Farm.

Morris Curtis, 83, the founder of the company, tells the story:

“In the middle ’60’s, there was a great movement of people to the mountains in our area. They were called hippies and they loved raw honey. So that’s what I produced. Since these people liked wild things, I called my outfit Wild Bee Honey Farm. Everybody loved the name. Bees reproduce by the old queen taking the field force of worker bees with her to start a new hive somewhere else. Lots of people catch swarms to start new hives. That’s what I did when I got started. My youngest son Mike kept bees with me all the time while going to school and to trade school. In 1995 I retired from the business and he runs the outfit. We’re still producing raw honey. Honey heated over 110 degrees Fahrenheit is no longer raw honey. So we use low heat in our extracting and bottling processes. Extracting is when you take frames of honey out of the hive, cut off the caps with a hot sharp knife and put the frames into a special machine called an extractor. It spins the frames around causing the honey to come out of the comb. Sometimes the bees eat up all of their honey then you can help them stay alive by feeding them special sugar or sugar syrup.”

“My father Morris Curtis started the business and I became a full-time beekeeper at age 19 after 2 years of trade school. At one time we took our bees to California, Nevada, Oregon and Washington. Now we stay in Oregon and California. In 1995 Angelika joined with me in marriage and we work together. We now have a son, Daniel, and daughter, Rachel, who might become the third generation beekeepers. We’ll let them decide when they are older. We try to keep our different honeys separate so they are as close as possible to the pure variety of plant the bees are collecting from. Sometimes it is impossible to do that because far too many plants are blooming at the same time so we give them a more generic name like Wildflower or Spring Blossom.”

“When I first met Mike and he told me he kept bees, I really never thought of such a profession but it seemed mighty interesting. I drove with him a couple times on day trips to pick up equipment, etc., but I found out most of the driving is at night because the bees have to be at home in their box when you move them.

A year after we were married, I was laid off from my job so I started helping with the bee business. My mother-in-law decided she wanted to go to the Grower’s Market and sell honey there… but it was somewhat slow so she discontinued doing it. I thought I’d give it a try. At that time, we were only selling honey from our little stand at our house and we didn’t have a label to speak of. There was a paper label that came in white and fluorescent orange with the outline of the State of Oregon on it and not much else. After sales started improving we designed a pretty new label for the honey. The view of the mountain is what we see from our house.

We started trying to make more and more varietal honeys to give our customers a choice. Now we can offer anywhere from 3 to upwards of half a dozen types, depending on the time of year.

I’d always made a few candles, more as a hobby than anything else. In late 2006-early 2007, I decided to try really getting into the candle business and building up my assortment. I purchased some molds but more than that I learned to make custom molds so I can pretty much make a candle out of anything I want. My goal is to have the largest assortment of beeswax candles on the web.” 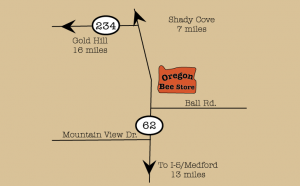